Reason 8.0 In Dub (3): Delayerings and Reverberations 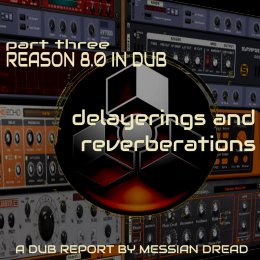 WWW, November 2014 - Reverb and delay: the two basic effects for a Dub mix. In this third chapter of REASON 8.0 IN DUB, both effects are subject to a deeper reviewing in word, sound and sight. Another original Reggae riddim was created, rendered to eight audio tracks and imported into a multi-track DUB set up in Reason. A report.

Before we'll take a look at some of the delay and reverb devices and -more important- see and hear them in action, a few words about creating a riddim in Reason. Reason 8.0's new browser is a tremendous help during this process. Where it's rather obvious how the quality of the work-flow had dramatically improved since Reason 3.0, this browser in itself contributes significantly to it. Picking sounds for your sampler or drum computer goes very quick, especially when you use the drag-and-drop possibilities.

Love it or hate it: the Neptune Voice Synthesizer does it's work quite well. Just load a few vocal samples and make sure they're fit in the rhythm. 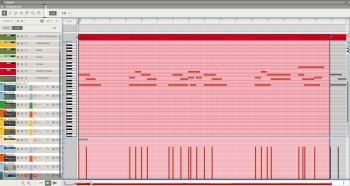 After this, make a little midi harmony in the Neptune's sequencer channel (see picture right, click to enlarge), make sure the vocals feed the Neptune and you have your very own harmony vocals 21th century style. 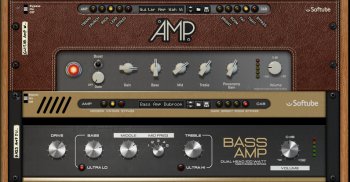 Another thing worth mentioning here are the two amps created by Softube that ship with Reason 8.0.

When you want to use real guitar sounds next to the real bass guitar sounds, both the guitar amp and the bass amp do a wonderful job. The wah-wah guitar you'll hear in the mix has a significant better sound when run through the amp and so does the bass.

Creating a riddim is as easy as your inspiration will let you fill in the blank sequencer. It does take computer power, though. Even running the DAW in 64 bit modus with full 8 gigabytes available will not let you set up a complete Dub environment while using all the instruments. Rendering your riddim to audio tracks solves that problem and will bring you directly in the situation wherein Dub is actually made: after all, it's a remixing technique of multi-track recordings or "stems".

For this series, a special multi-track Dub environment was created in Reason. Unfortunately it's not possible to make the stems available for download because of license limitations, but when you take a look at the Dubroom's tutorial on making Dub with computers or at the graphic right (click to enlarge), you'll get the idea. This is the principal according to which the Dub environment is set up.

Since Reason's console has eight auxiliary outputs, you'll have the possibility to connect six effects. Route the output of the effect devices to a channel input and you can layer effect over effects. This is exactly what's going to be done quite heavily in the Dub that was made for this report.

Now, let's take a closer look at the effects themselves.

In the Dub mix, you'll hear both reverb devices or just the DR-1. At the console, the two channels at the far right feed the devices. There is quite a difference to be heard when you hear both reverb devices, as both devices come back into the console in the same channel. To achieve this set up, use was made of the FREE Audio merger and splitter Rack Extensions by Blamsoft.

You'll hear a little bit from the Echobode Rack Extension. This is a frequency shifter and delay device that at this point is yet to be reviewed deeper. THE ECHO is taken to a deeper level as well. Of course, the manual delay (aux 1, more info here) and the RV-7000 with a Dubroom Ping Pong delay preset are featured.

The T2 Phaser (available for around 15 euro at the propshop) does some crucial things to the drums. A Dubroom preset is used for it. This is a heartically recommended Rack Extension. Just listen to what it does with the drums!

The signals feeds like the Ping Pong delay, which at it's turn feeds THE ECHO. That's just one layering of effects used in this mix. There's a lot more going on, all possible because of the way everything is routed. Tweaking the EQ on the reverb channel is quite effective, but that was already made clear in the previous dub mixes.

It's not easy to create Dub effects in the lower frequencies (read: bass line), but both the DR-1 and the RV-7000 showed to be perfectly able to deal with the deeper realms. They sound nice together as well.

To conclude, a word about the Echobode. The first audible patch was taken and the thing tweaked just a little bit, without being hindered by any knowledge of the device itself. This in itself showed a potential that most certainly will be looked at more in-depth.

The Dubroom welcomes your comments and stimulates exchange of ideas and opinions, but will refuse personal attacks, spam and off-topic material.