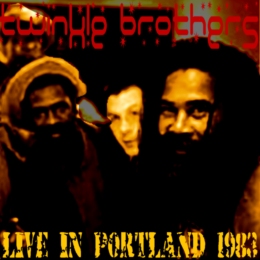 WWW, December 2008 - They are known for their Conscious lyrics in which they don't apologize for the truth that they sing over some crucial drum and bass lines. The Twinkle Brothers, live in Portland.

The sound quality is definitely not the best, but the contents of the recording is more than just historical. The music is fat, enthusiastic, spiritual and strong in the same time.

As they play one -long- tune after the next, messages are spread about freedom, equality and justice. The year is 1983, and we hear mention of apartheid but also stuff that is very actual still.

This was the time before the political correct cultural mafia decided to take on Reggae with the result that may be considered rather known as many (had to?) sign gag orders in the name of "compassion".

Anyway, you can't keep a good message down and even though the sound quality is poor, this show was obviously crucial as the vibes clearly show.

Straight to the head of Babylon!